Covid-19 vaccination
Grateful to India for keeping Maldives on top of vaccine aid list: ministers
Minister Naseem thanked PM Modi, for thinking of Maldives and helping Maldives during this difficult time and for “always being the comforting hand”
India’s noble gesture received today is a “true symbol” of the “sheer strength” of the bilateral ties between both countries
Ministers Shahid and Naseem described that the vaccines would strengthen the battle against the pandemic 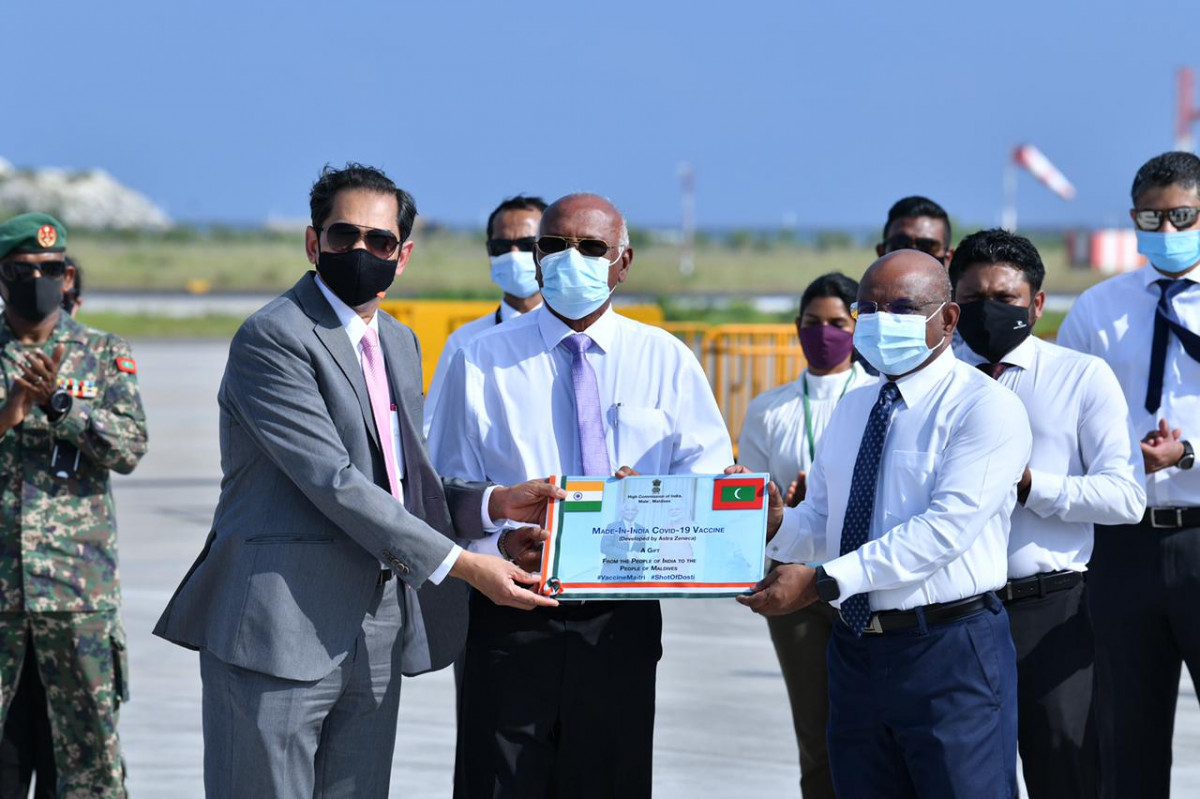 Maldives remains grateful to India for always keeping Maldives at the top of the list, for which India has been providing aid and timely assistance.

These remarks were reiterated by the Minister of Foreign Affairs Abdulla Shahid and Minister of Health, Ahmed Naseem during the ceremony held at the Velana International Airport (VIA) to receive the India-sourced Oxford-AstraZeneca Covishield vaccine doses provided by the neighboring nation.

As such, both ministers expressed immense gratitude to the Prime Minister of India, Narendra Modi and the country’s External Affairs Minister, Dr. S. Jaishankar for the generous donation of Covid-19 vaccines to the Maldives, which they described would strengthen the battle against the pandemic.

As such, FM Shahid noted that India stood strong and staunch as ever by Maldives’ side while caring for their own, which is proven by the fact that Maldives was the first country to receive Covishield vaccination doses manufactured by India’s Serum Institute.

Highlighting that India’s noble gesture received today is a “true symbol” of the “sheer strength” of the bilateral ties between both countries, FM Shahid expressed profound and deep appreciation to the neighboring country, especially PM Modi for his “personal commitment” to address the needs of India’s neighbors and for “keeping the Maldives at the very top of the list, at all times”.

Also speaking at the event, Minister Naseem noted that being the first country to receive Covishield is just another example of India’s generosity and that this is the arrival of hope in the Maldives and the beginning of the government being able to provide protection against Covid-19 to all citizens.

Minister Naseem thanked PM Modi, for thinking of Maldives and helping Maldives during this difficult time and for “always being the comforting hand”. Further, Minister Naseem expressed keenness to work very closely with the foreign ministry, alongside High Commissioner Sudhir in acquiring further aid.

He went on to extend warm gratitude to FM Shahid for his help given to the health ministry, without which the government “would not have been able to achieve today’s success”.

Director General of Public Health, Maimoona Aboobakuru and senior government officials were also in attendance at the event, where Maldives received 100,000 doses of Covid-19 vaccine from India under a grant assistance.