RaajjeTV Arson Attack
Then-president Yameen was told "mission accomplished" after RaajjeTV arson attack
Al Jazeera's "Stealing Paradise" also noted connections between Adeeb and the RaajjeTV fire
Yameen received a message from then tourism minister, who later became VP, saying "mission accomplished" on the day of the attack
This was revealed in a statement by Yameen’s former ally, to the Presidential Commission on Murders and Enforced Disappearance
6,684 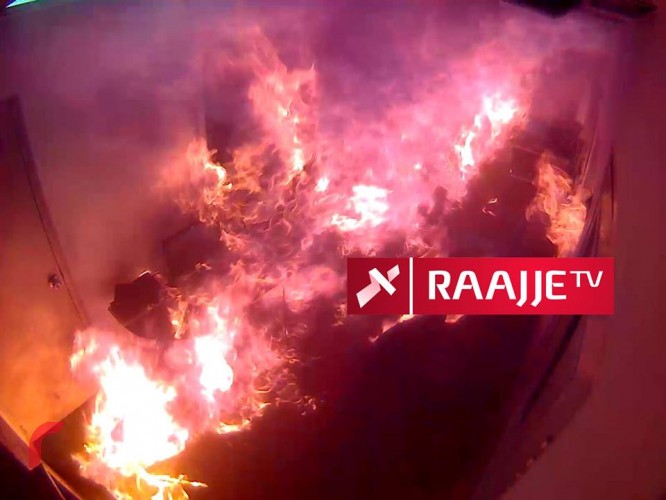 A screenshot from the CCTV footage publicized by RaajjeTV
Raajjemv

It has been revealed that former President Abdulla Yameen had been informed of a mission being completed, following the 2013 arson attack on privately-run RaajjeTV.

This was revealed in a statement by Yameen’s former ally, to the Presidential Commission on Murders and Enforced Disappearances, and was included in its investigative report.

While the commission completed its investigation and forwarded the report to the President’s Office earlier this month, the office publicized it on Sunday.

Former parliament speaker and Dhiggaru constituency MP, Ahmed Nazim, told the commission that Yameen received a message while they were playing cards at his place, on the day of the arson attack.

Nazim is to have spent a lot of time with the former president prior to their fall out; and Nazim’s 25-year jail sentence on corruption charges in April 2015.

Noting that Yameen did not have his glasses on at the time, Nazim said that he was asked to read out the message.

Nazim said that he was not aware of what the message was referring to, but that he was able to link the two after learning of the arson attack on RaajjeTV.

While he did not specify whom the message was from, the former MP was speaking about former Vice President Ahmed Adeeb -the tourism minister and Yameen’s closest confidante until Adeeb’s arrest over an assassination attempt on the former president.

As such, he said that Yameen and Adeeb were planning to bar former President Nasheed’s candidacy in the 2013 presidential elections, and that the former VP had even spoken of creating a bomb to be placed inside a vessel the Nasheed was traveling in.

Noting that this was after Dr. Afrasheem’s murder, Nazim said that the reason for mentioning this was because Adeeb “was adamant” about barring Nasheed’s candidacy, and added that pinning the lawmaker’s murder on him to ensure this “is a possible motive.”

Earlier on Sunday, Nasheed, who is the current parliament speaker, had expressed concern over some details missing in the inquiry commission’s report including attempts to pin the murder on then-ruling Maldivian Democratic Party (MDP).

He is to have sent a text saying “blast it again” on 28th August 2014, to then Police Chief Hussain Waheed, who is to have responded “no I guess better to control sponsors.”

On 7th October 2013, RaajjeTV’s main studio was destroyed in an arson attack, as well as its control room, cameras, computer systems, broadcasting and transmission equipment.

The attack came during the 2013 presidential elections, on the same day the Supreme Court made a ruling on whether to allow the elections to go ahead.

Last updated at: 2 months ago
Reviewed by: Aman Haleem
0%