Chinese rocket lands in Maldives
Coastguard deployed as large Chinese rocket lands near Kudahuvadhoo
MNDF's Central Area Coastguard Squadron was deployed after reports surfaced that the rocket debris had fallen into Maldivian waters
Coordinates from the China Manned Space Engineering Office place the rocket debris some 45km away from Kudahuvadhoo island to the west of Maldives
China has yet to achieve controlled descents for their rockets, and launched based on the assumption that the rocket would have an ocean-descent
24,918 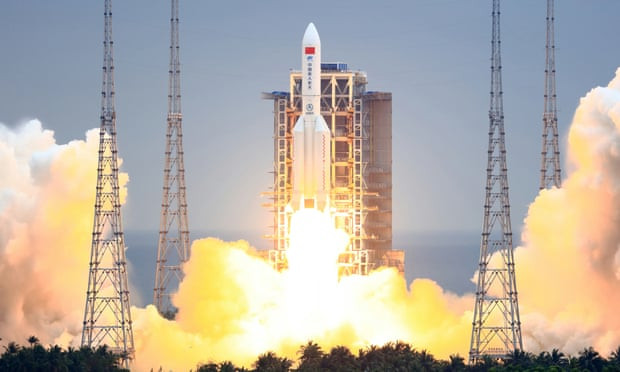 The Maldives National Defense Force (MNDF) has revealed that the force's Central Area Coastguard Squadron is now active after a large segment of a Chinese rocket reportedly landed in Maldivian waters, less than 50km from Kudahuvadhoo island of Dhaalu atoll.

Huge chunks of debris from the rocket, which is believed to have disintegrated significantly during re-entry into the Earth's atmosphere, were reported to have descended into the Indian Ocean near the islands of the Maldives. According to official coordinates by the China Manned Space Engineering Office, the last-stage wreckage of the Long March 5B Yao-2 launch vehicle had re-entered the atmosphere, landing some 45 kilometres from the nearest island. The rocket is believed to have landed near Kudahuvadhoo island of Dhaalu atoll.

A statement by NASA Administrator Senator Bill Nelsons regarding the debris from the rocket reads that China was clearly failing to meet responsible standards regarding their space debris. The statement called for all spacefaring nations and commercial entities to act responsibly in space to ensure the safety, stability, security and long-term sustainability of outer space activities.

MNDF Coastguard is now active in surveying the central regions of the Maldives following reports of the rocket debris having landed near Kudahuvadhoo island. The Long March 5B Yao-2 rocket is 108m long and weighs 40,000 pounds, and had been launched into outer space on 29 April 2021 by the Chinese space mission.

Three others suspected of extremism arrested in Hulhumale'