Navaanavai protest
Navaanavai stages protest, calls for employee rights and atolls' development
The small group of 10 held banners and placards and raised concern over the lack of efforts by the parliament to ensure the rights of those affected by the pandemic
It began at 8:30am on Monday
The protest is titled “Majlis Heylavvaa!” translated to "wake up the parliament"
6,566 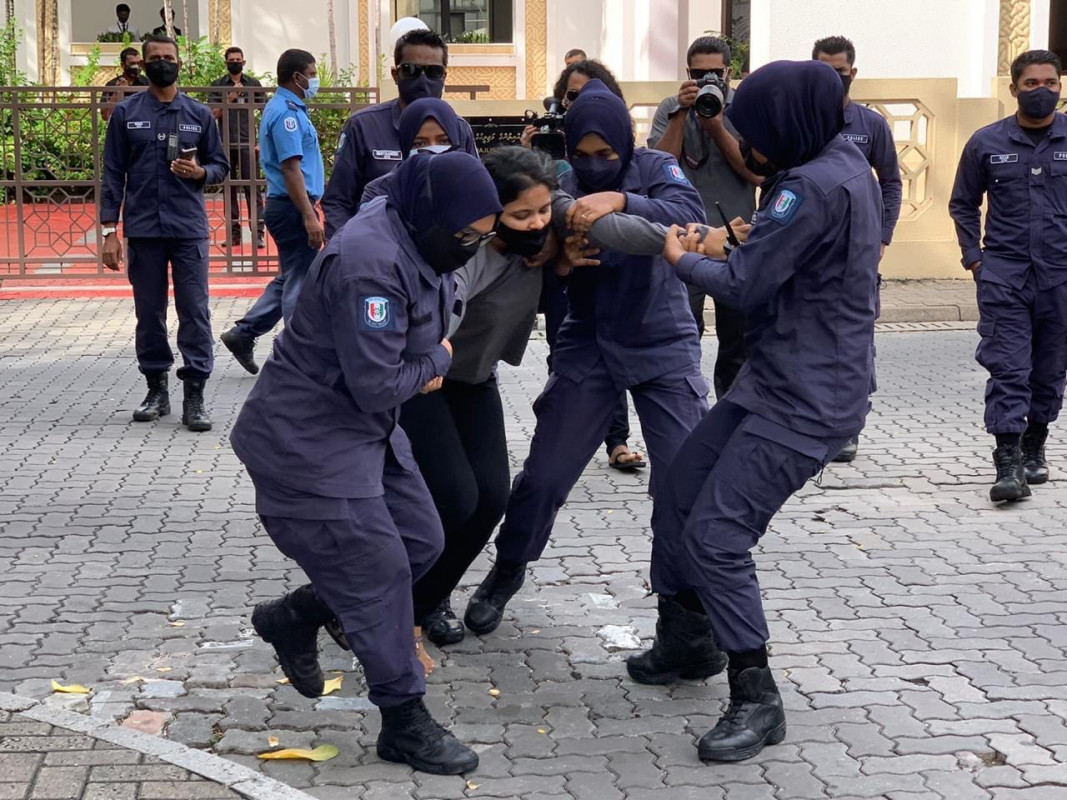 The protest was held in front of the parliament house
Twitter

Navaanavai, a movement to empower citizens socially, economically and politically has staged a protest, titled “Majlis Heylavvaa!” infront of the People’s Majlis premises.

Protestors staged “Majlis Heylavvaa” translated “wake up the parliament” at 8:30am on Monday and shortly after, officers of the Maldives Police Service (MPS) had dispersed the crowd, which then regrouped in front of the Indian embassy building, in the area cordoned off by the police.

The small group of 10 held banners and placards and raised concern over the lack of efforts by the parliament to ensure the rights of those who have lost their jobs and been forced to evacuate their homes due to the adverse impacts of the Covid-19 crisis.

Speaking to RaajjeMV regarding the purpose of the protest, the movement’s spokesperson, Fathimath Saaira stated that they staged the protest to raise their voices in favor of speeding up the disbursement of funds under the income support allowance scheme, against individuals being forced out of their homes due to inability in paying rent as well as to provide appropriate funding for women and children in need.

A lot of people do not receive allowances, people are forced to work without contracts, there are employees without bank accounts and those who were not given their terminal letters. These documents are not important to seek when providing aid for people. Business tycoons get over MVR 300 million in loans for their resorts. But there are over 40,000 individuals deprived of providing their families with basic necessities and paying bills and there are over 300 individuals who have not been provided allowances”
Fathimath Saaira, Navaanavai spokesperson

She further stressed that the parliament is yet to address this issue and is far from providing a solution for those in need.

In addition, protestors, who wore masks and maintained social distancing by standing a reasonable distance apart, called on authorities to not spend expenses for Malé development, on outlying atolls and for the swift introduction of Covid-19 testing facilities in outlying atolls.

A number of police officers were active in the region, and the authority earlier warned against holding the protest as well as any other forms of public gatherings during a State of Public Health Emergency.

This, police said is a violation of the orders of the Director General of Public Health Maimoona Aboobakuru, at a time authorities are implementing the lockdown ease plan in phases. The country is currently in phase two, which still has a number of restrictions in place including the prohibition of public gatherings of more than three people.